The Director for the Program for Evolutionary Dynamics and Professor of Mathematics and Biology at Harvard University (Martin A. Nowak) and the Norris-Hulse Professor of Divinity at University of Cambridge (Sarah Coakley) have co-edited: “Evolution, Games and God: The Principles of Cooperation.”  The last paragraph of Nowak’s Chapter 4 states:

“The two fundamental principles of evolution are mutation and natural selection. But evolution is constructive because of cooperation. New levels of organization evolve when competing units on the lower level begin to cooperate. Cooperation allows specialization and thereby promotes biological diversity. Cooperation is the secret behind the open-endedness of the evolutionary process. Perhaps the most remarkable aspect of evolution is its ability to generate cooperation in a competitive world. Thus, we might add ‘natural cooperation’ as a third fundamental principle of evolution besides mutation and natural selection.”

I’ve seen no evidence that mutation should be considered a fundamental principle of evolution.  Mutations theory was added after-the-fact to Darwin’s works. Darwin clearly stated that ‘conditions of life’ preceded natural selection. The concept of mutated genes was unknown to him; he never knew about genes.

We now know that Darwin’s ‘conditions of life’ are nutrient-dependent and pheromone-controlled. Nutrient-dependent pheromone-controlled adaptive evolution allows us to dispense with mutation theory in the context of Nowak’s ‘natural cooperation’. For example, natural cooperation in this 14 second video is exemplified by two ants in the context of nutrient acquisition: 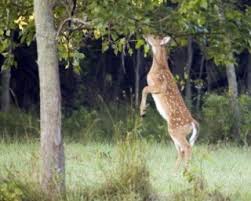 Natural cooperation in deer would be exemplified if there were two deer in this picture and one deer was helping another reach leaves that were higher up in the tree, or helping to carry leaves back to their ‘nest’. With a picture like that, we could place mutations theory in the context of natural selection for nutrients in ants, in the context of natural cooperation, and in the context of the metabolism of nutrients to species-specific pheromones that control reproduction.  Without a picture of one deer helping another to acquire nutrients, we are left with the concept that deer might somehow mutate and become like giraffes that have adaptively evolved to acquire nutrients from taller trees.

Pheromone-controlled ‘natural cooperation’ follows from the metabolism of the nutrients to species-specific signals of nutrient-dependent diversity. Organisms naturally cooperate with conspecifics that are recognized because they metabolize the same nutrient sources to species-specific pheromones. Heterospecifics produce nutrient-dependent pheromones that help identify them as a threat or as a potential source of nutrition.

Because natural selection is first and foremost for nutrients, in accord with Darwin’s ‘conditions of life,’ natural cooperation is pheromone-controlled via the metabolism of nutrients to species-specific pheromones. Eusocial organisms like ants and humans have adaptively evolved due to natural cooperation.

I’m not sure why others think that mutations are somehow involved in natural selection or why mutations would continue to be considered one of the three fundamental principles of evolution, when mutated genes were never part of Darwin’s theory. If anything ever needed to be added to Darwin’s theory in the context of natural cooperation, it is the current knowledge of epigenetic effects of nutrients and pheromones that makes mutations theory irrelevant to adaptive evolution. Mutations, for example, are not considered in the context of ‘conditions of life’ that precede natural selection. And mutations clearly have nothing to do with natural cooperation in any social species let alone any eusocial species. Nevertheless,  the honeybee model organism currently best exemplifies nutrient-dependent pheromone-controlled adaptive evolution, which is why I used honeybees instead of ants in my model of adaptive evolution (sans mutations).